Today was a lovely day! I went for a walk with Selam along the Promenade, and then we went to the Cours Saleya and walked through the Old Town before walking back home. The weather was beautiful and sunny. 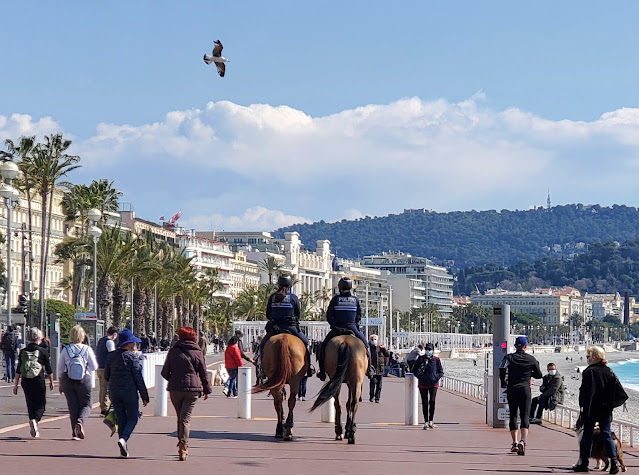 Almost as soon as we started our walk, we were greeted by the wonders that nature has to offer in the vast outdoors. We saw people, and other species as well. Pictured above are horses, and a majestic eagle soaring overhead, a symbol foreshadowing the heights that our day was about to reach!

We talked about my painting, we talked about Selam’s family, we talked about Guillaume being busy with work. We also noted that the new confinement rules were quite strange, but relatively convenient. We had our attestations de déplacement dérogatoire, and we had ticked the box for sports activities, so we were pretty much authorized to go for a walk within a 10 km radius of where we lived for as long as we wanted.

We talked and we walked and we made it to the Cours Saleya. Neither of us had been there in ages! It felt to me like I was transported back in time. Often when I’m with Selam and Guillaume, I get this feeling of being back in 2016 or 2017. And today, walking through Cours Saleya and the Old Town, I really did feel like I was on holiday! It felt like we could have been in Italy, or some town in France, or anywhere else really.

I guess I could say that it gave me “generic travel and holiday vibes”.

Walking through the market was lovely, and I saw so many things that reminded me of past travels. So many good, delicious things that I haven’t even thought of in the longest time, like truffles, which reminded me of Alba and truffle butter. 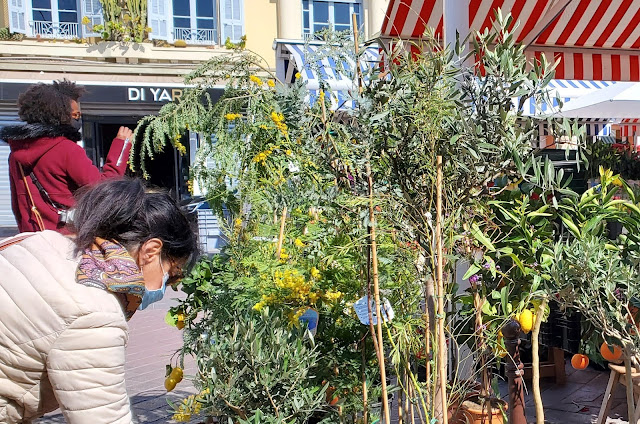 I saw lemons and oranges, which remind me of nice things.

There were many types of jams and honey. They even have mango jam. And now I have a jar of it too.

I wasn’t planning on spending any money today, but I saw some pink strawberries (pale pink, as opposed to the usual strawberry pink/red), and the seller said that they were delicious, despite their appearance. 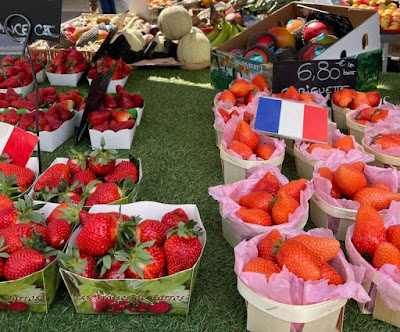 She doubled down and said that if I tried them once, I’d want more.

That sounds like addiction. Sign me right up! I bought a small box of these pale strawberries. We had them later, and they were indeed very sweet and tasty.

I also bought a bottle of mango jam, and no sooner had I bought that, I spotted this: 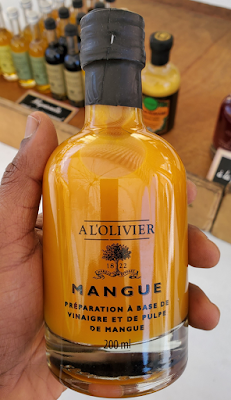 What?! I would never have expected to find such a thing in the great outdoors on this fine Saturday. But today fate has decided that I shall part ways with my money, so I gave it away to the seller in exchange for this beautiful orange bottle of mango vinegar.

Speaking of beautiful orange things, today I saw a large vegetable that has no business looking as enticing as it does. 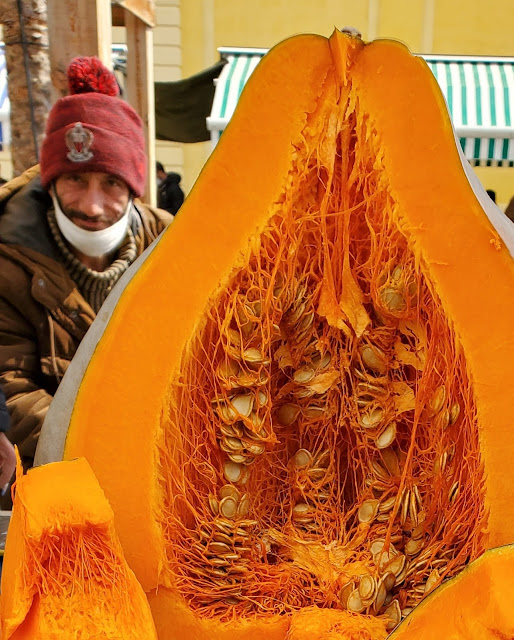 As soon as I saw this, my mind began racing with all the things I could do with it.

Pictured above is the said gorgeous orange vegetable, with its owner in the background wearing the look of such pride on his face from having raised such a beautiful specimen, proudly showcased front and centre of his wares.

We’d only started out journey, but we’d already walked along a beach,  I was already down some euro, and had snapped some beautiful photos. How could I not feel like I was on holiday.

But then I saw this seller selling selections of Italian pastries, and I felt transported to Italy.

Selam and I got a couple of aragostine; I got one filled with lemon cream, and Selam got one with an almond filling. (I'm just realizing now that I didn't end up giving the aragostine to Selam! 😅 I've accidentally brought it back home with me) 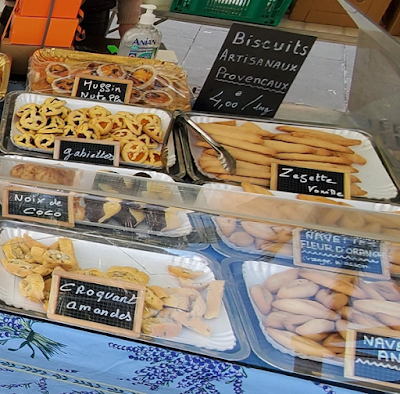 Also, they had provençal biscuits. Today, I also learned that there’s a biscuit called zezette.

We visited a few wine shops as Selam was looking for champagne. There too, it felt like we could have been anywhere. It could have been a wine shop in Portugal or Italy, and that was nice. There were also wines from Alba. 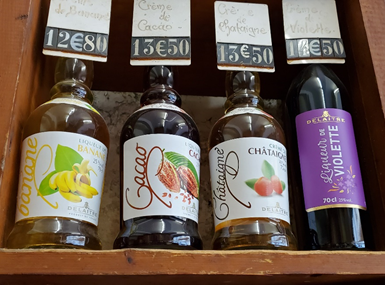 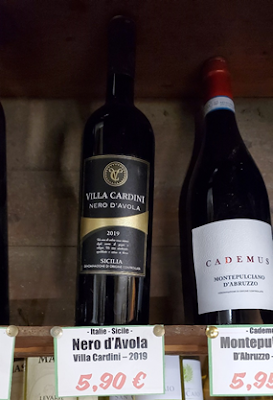 There was also a Sicilian wine

All these different sights giving me so many different memories reminded me of the spice and tea shop that Nkay used to work at. So Selam and I made our way to Girofle et canelle.

On our way there, I saw other reminders of Italy.

Well, it’s just an Italian restaurant, and I suppose that if we really were in Italy, the restaurant wouldn’t be called “Piccola Italia”. But I was in a holiday mood, so spare me.

There was a shop selling fresh handmade pasta.

There was even Japanese restaurants, just like in Rome!

We made it to Girofle et Cannelle, and it was open! 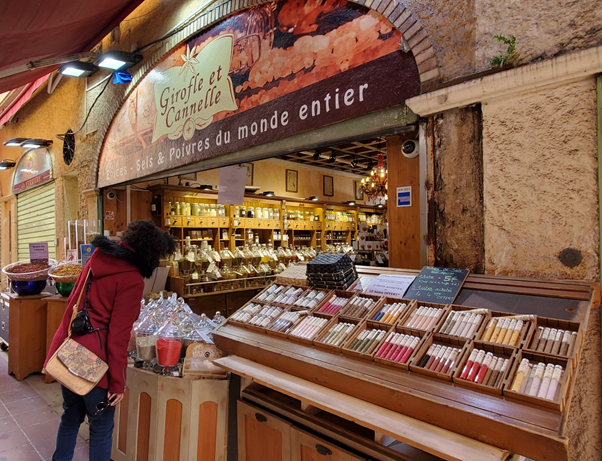 Ah, what a beautiful shop with beautiful colours, smells, and memories. It reminds me of Nkay, Pierre, and my birthday.

So many colours and smells from the spices and herbs!

Guillaume had decided to join us and he had left home and was already nearby us. So we headed out to meet him.

On the way, we saw the Statue of Liberty! 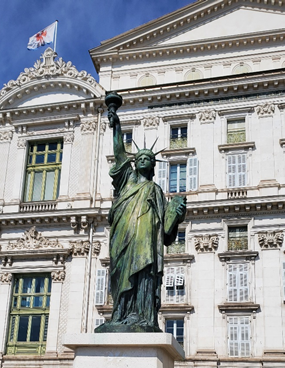 I had heard of this statue before, but today is the first time I’m seeing it myself. Of course Selam got a picture of me with it, and I’m looking forward to seeing that. I’m also looking forward to the other photos she took today, because she takes great photos. 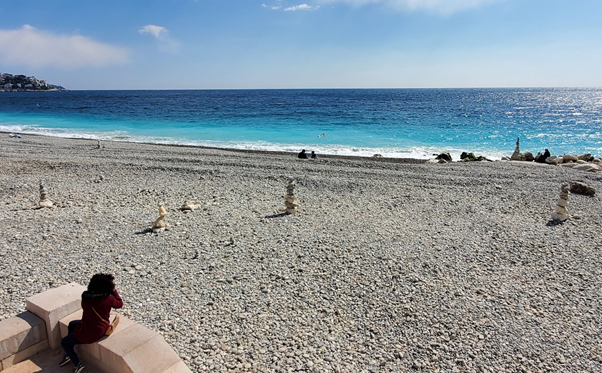 Here is a shot of her in action, photographing this unusual natural rock formation that I had not noticed in Nice before this. Or perhaps it was manmade. Such are the mysteries of the great outdoors.

We had met up with Guillaume, and of course, when he’s around, I feel even younger. Like I said before, it’s like I’m transported back in time when I’m with these friends. We sat down along the Promenade for a few moments and ate our things, but then the wind had gotten so windy that my eyes began to grow teary, and we started heading back.

For our final stop before home, we stopped by a Greek grocery shop really not too far from my home:

Recently, I decided to start playing Pokémon again. I don't really recall what triggered it, but I remember I was just in the bus one day, heading home from work, and I suddenly thought "Hmm, I haven't played Pokémon in ages! Let's download a Gameboy emulator on my phone and replay Pokémon Red". As I played it, I recalled how much fun it was, and when I got home, I wondered if the new Pokémon games were any good. The latest Pokémon game I had played at the time was Pokémon Sapphire, which I played around 2008 - 2010 probably, and which I really enjoyed. And I had briefly played Pokémon Go when it came out in 2016, but it didn't have as many features back then, so I didn't play it too long. So I checked online, and found that the latest version of Pokémon was Ultra Sun and Ultra Moon , released on November 2017. So here was a really recent Pokémon game, not even one year old yet. I went ahead and downloaded an emulator for the 3DS an
Read the whole thing >>

Hello friends, Happy New Year! Well, at least, I hope so. 2011 wasn’t a fantastic year for me; in fact, I think it was quite a sucky year, with lots of unfortunate and unnecessarily stressful events. Of course, it wasn’t completely horrible – there were some ups and downs.
Read the whole thing >>
English: I poop rainbows
Bahasa Melayu: Ku terfikir